From a disused and degraded industrial site to a flourishing urban oasis, sparked by a dream and powered by countless volunteers and a lot of compost.

This is the story of Perth City Farm.

This dream began with Rosanne Geddes (now Scott) and Joanne Tucker, two young mothers who joined the tree planting organisation Trillion Trees formerly Men of the Trees (MOTT) in 1989. They loved planting trees on farms, but dreamed of creating an urban space where young people could learn about land care and connect with themselves and their community.

In 1994, the dream became a reality when Rosanne Scott and Chris Ferreira (Landcare lecturer) were linked to the East Perth Redevelopment Authorities’ Mike Tooby and Reuben Kooperman. MOTT was granted permission to use a near 1 hectare site in East Perth for two years. Founding members Clayton Chipper, Neil Bodel, Amanda Dent, Coral Buscomb, Chris Ferreira and Rosanne Scott were overjoyed to be given the opportunity to repurpose this degraded, contaminated site to become Perth City Farm, a branch of the Men of the Trees.

Many years ago this precious land was near the site of the old Claisebrook water course and wetlands and was a rich source of food for Whadjuk Noongar people, the traditional custodians of Boorloo (Perth).

White settlers used this plot in far more intensive ways. We believe our distinctive warehouses were constructed using designs by CY O’Connor for the Midland Railway Workshops. Later they were used as an engineering workshop by Mobil, an engineering foundry and a scrap metal yard. By the time the City Farm crew arrived, the site was degraded, but nestled next to a busy train line, train station and very close to the Perth CBD making this a great site for the project.

The grand vision for the site was to incorporate the environment, education, arts, community engagement and healthy food all in one place. The first step of the project however was to prepare the site for all of this work; decades of heavy metal and chemical pollution on the site left the soil extremely toxic; it was too contaminated to even touch.

Almost 30 people started work on the site to clear the area and remove as much of the scrap heap as they could. The workforce was comprised of volunteers and unemployed youth who wanted to transform the area into a thriving community centre. Soil that was too contaminated to remediate was removed to a depth of 1.5m and sent to the Redhill tip, where it was contained appropriately.

In April 1994, a tyre garden was built near the entrance where the first vegetable patch was planted. One of the old warehouses was cleaned up and converted into a classroom and community gathering area. In the centre courtyard, raised tyre beds were built on top of the thick capped concrete and filled with red dirt leftover from a local theatre production of Bran Nue Dae. You can still see this distinctive soil leaking out of the beds!

In April 1994, the first Landcare and Environment Action Program (LEAP) training course commenced. The 26-week course taught participants nursery and land conservation techniques, plant propagation, rural and urban landcare, permaculture design, and horticulture. The LEAP training course was aimed at unemployed youth aged 15-25 and was administered by the Western Australian Department of Training and Men of The Trees WA, and funded by the Federal Department of Employment, Education and Training. 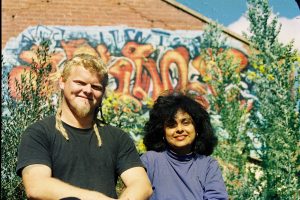 at Perth City Farm until August 1996, when the Federal Government stopped the program and replaced it with the national Work For the Dole initiative in 1998.

By the end of 1996, Neal Bodel, Clayton Chipper and Chris Ferreira had left the management team of Perth City Farm to pursue other projects. Rosanne was joined by Thom Scott who took over managing farm and volunteer activities. Through this period the farm started hosting a huge range of events including workshops, festivals, art exhibitions, markets, live and electronic music events (including some that would last an entire weekend). The events hosted brought young people together throughout Perth, and encouraged community participation. They also supported many young artists with the space to create, including John Butler, Eskimo Joe and Stormie Mills. Perth City Farm has been the inspiration and training ground for many young leaders in Perth. 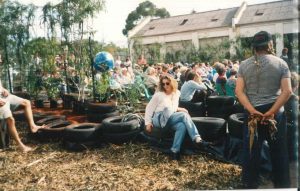 While there was a huge focus on the arts at City Farm, it wasn’t all just multi-day parties and festivals! The site became a hub for environmental education and gardening workshops. School groups would tour the site, learning the ease and importance of setting up their own gardens, learning about permaculture, horticulture, sustainable living and the importance of cultural links to the natural world. The Farm became a popular destination for TAFE and university students, many choosing us as a final project for their placements.

In 1999 it became apparent that the future of Perth City Farm was uncertain. A site that had thrived and produced a huge amount of social capital over the previous 5 years was under threat with talks of a high rise development and car parks for the site. 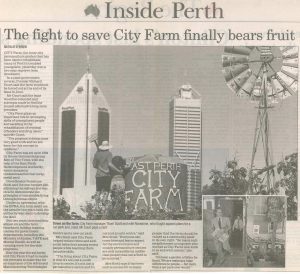 Thom, Rosanne, and the Management Committee chaired by Ian Rawlings, and a community group who called themselves the Save City Farm Action Group (led by Linda Rawlings), conducted a peaceful battle with the authorities to keep the site. The protest group received support from the media and local community to help spread the message.

By February 2000 the State Premier Richard Court and Minister for Employment and Training Mike Board announced a two-year lease extension and a promise to find a new long-term site. In July 2002, Alannah MacTiernan Minister for Planning and Infrastructure announced that funding would be provided to upgrade the buildings.  And finally in October 2004 a 40-year peppercorn lease of the site was signed for half a hectare of the site. This lease ensured the position of Perth City Farm for the future, finally allowing the management freedom for long-term planning.

In 2004 Sandra Krempl assisted us with our first large community consultation that resulted in the first business plan that outlined the communities’ vision and social enterprises, thus capturing the essence of what Perth City Farm stood for.

In 2005 Perth City Farm celebrated a huge milestone in their work to rehabilitate the site, being awarded organic certification. This meant the Perth City Farm Saturday Farmer’s Market was the first market in WA to provide only certified organic and biodynamic produce. 2005 was also the year that the west end of Brown Street was renamed City Farm Place, thanks to Tony Ransom a long-time supporter who campaigned for the name change. 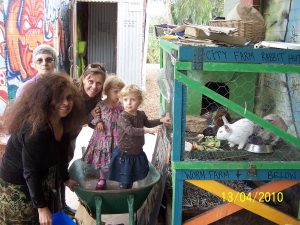 In 2010 a small building at the front of the site was transformed into a training café with the help of the infrastructure funding for training from the Australian Government through the Teaching and Learning Capital Fund for Vocational Education and Training. The café brought new people to City Farm, provided refreshment to our visitors, and provided hands on training to young people studying hospitality.

By the end of 2010, the East Perth Redevelopment Authority and Lotterywest had both funded extensive infrastructure upgrades to the buildings. Acknowledgment must be also given to Central Institute of Technology (TAFE), Growing Communities WA, the City of Perth, Nulsen Inc, and Men of the Trees for their support to grow Perth City Farm.

Perth City Farm hosted WA’s first Work for the Dole (WFTD) project and has hosted many more over the years. These projects aimed to give work experience, skills and valuable knowledge in permaculture and sustainability to unemployed people of all ages in WA. Key projects delivered through this program include the renovation of our Community Room kitchen, building our ornate farm fence and developing the Soil Centre. 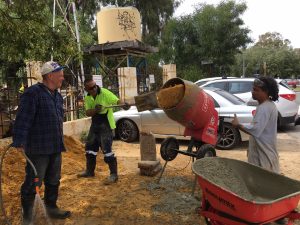 Over the years the team have shared their skills in community-based food growing to help design, install and/or maintain other garden spaces around Perth. These include the Bassendean Community Garden (2002), Urban Orchard and Wetlands in the Perth Cultural Centre (2011—2020), QV1 Rooftop Qmunity Garden (2016 to present) and the Girrawheen Community Garden (2020).

Looking to the future

In September 2017, Perth City Farm gained independence from Trillion Trees, becoming an incorporated body in its own right. Perth City Farm celebrated its 25th birthday in 2019 with a series of events exploring the Aboriginal history of the area and re-visiting some of the fun and significant things that have happened during the City Farm years. A new strategic plan for the organisation was also developed, putting the organisation in a great position to build on its history and continue delivering great community benefit for years to come.

Peter Niel Evans created a comprehensive history of our site (particularly before City Farm moved in) with several more photos if you wish to learn more. It can be downloaded here.